Boxing – Perhaps Now Even More TBI Dangerous Than Football, With The Latest Death That Had Little Chance For TBI Recovery. 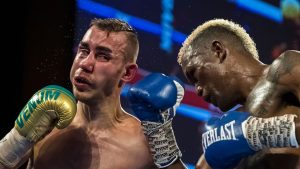 Dadashev, 28, was rushed to the University of Maryland Hospital in Prince George County after he was seen leaving the ring with assistance and ultimately left the arena on a stretcher, ESPN reported.The grueling loss to Matias, 27, came to an end when Dadashev’s trainer threw in the towel after the 11th round.

According to the report, the formerly undefeated boxing pro suffered a brain bleed on the right side and a portion of his skull was removed to reduce brain swelling. Dadashev’s neurosurgeon Mary IH Cobb reportedly informed his manager at around 2:30 a.m. Saturday that he was showing signs of severe brain damage.(foxnews.com)

UPDATE:  Russian boxer Maxim Dadashev has died from injuries he sustained during a fight on Friday night, according to his trainer, Buddy McGirt. Dadashev was 28.

Dadashev was placed in a medically induced coma after his loss to Subriel Matias in an IBF junior welterweight title eliminator bout. Dadashev underwent surgery at UM Prince George’s Hospital Center, Maryland, for bleeding on the brain. On Saturday, doctors at the hospital said the fighter had suffered severe brain damage and his death was confirmed on Tuesday.(theguardian.com)