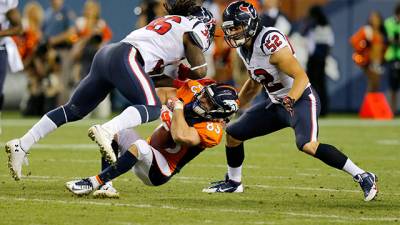 After Six Confirmed Concussions, Would You Try And Stop A Loved One From Playing Football Again?

By all accounts—his own, his teams’, and a top NFL-affiliated concussion specialist’s—Wes Welker is healthy and ready to play. It’s the concussions. At least six official ones in his career, maybe as many as 10. (That doesn’t count the ones he may not even know about.) He suffered three in nine months with the Broncos, leading one former teammate to publicly declare he wanted Welker to retire. The thing about concussions is that the more you’ve had, the more likely you are to receive more. Welker’s brain is especially fragile and vulnerable.** Here’s the thing: The three concussions in a nine-month span were widely discussed, but it’s impossible to say how many concussions Welker has had beyond that. Teams familiar with Welker’s medical history say they believe he has had at least six concussions and as many as 10. Only he knows for sure. And it’s possible he may not know the full number.** Wes Welker was recently signed to play for the St. Luis Rams.** (Deadspin.com, Bleacherreport.com)