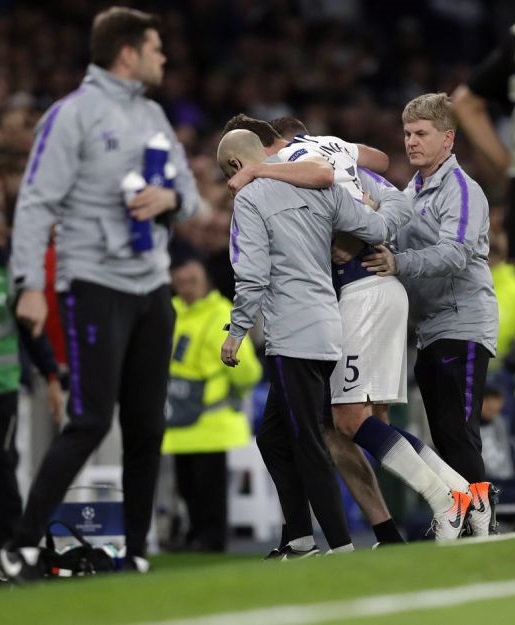 Soccer Star Collapses From Head Injury, Yet Medical Staff Sends Him Back Into The Match With No Regard For TBI.

Tottenham defender Jan Vertonghen was knocked out of Tuesday’s Champions League semifinal first leg with a nasty head injury. Or so we all assumed, at least, when Vertonghen clashed into teammate Toby Alderweireld and Ajax goalkeeper Andre Onana late in the first half.

The collision left Vertonghen bloodied, down on the pitch for minutes, receiving attention from Tottenham’s medical staff.

The only people on planet Earth who didn’t realize Vertonghen needed to leave the game, however, were the ones that mattered: members of that medical staff.

After extensive on-field treatment, and more on the sideline, Vertonghen was somehow cleared to return. Referees seemed to realize he shouldn’t. Everybody watching surely realized he shouldn’t. And yet licensed professionals — the few people who should know better than anybody — didn’t.

And less than a minute after Vertonghen was allowed back on, their irresponsibility turned to both embarrassment and fright.

Vertonghen himself realized he wasn’t right. He keeled over. He drooled. He would have collapsed if members of the team’s staff hadn’t kept him upright.

It should lead governing bodies — FIFA, UEFA, football associations around the world — to require independent doctors on sidelines to evaluate head injuries. It should lead the game’s legislators to introduce concussion-specific substitution rules.

But if past inaction is any indication, unfortunately — and dangerously — it won’t.(yahoo.sports.com)