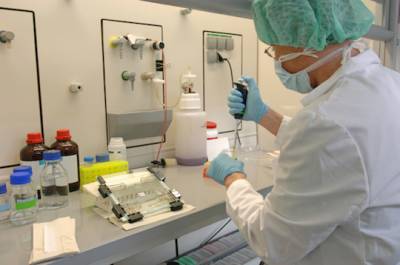 Researchers at the Johns Hopkins Bloomberg School of Public Health are growing tiny replicas of the human brain to help the study of neurological diseases in a trend many hope could lead to better treatments and even cures for some of the most debilitating illnesses. The Hopkins scientists join a handful of other medical researchers around the country who are culturing so-called “mini-brains” in the lab. It’s a relatively new field of scientific inquiry that could revolutionize how new drugs are tested for effectiveness by replacing drug testing on lab animals with testing on human cells. This process could offer more accurate test results and help in the development of new, more effective drugs. The scientists reprogrammed the genes of human skin cells to make them like embryonic stem cells, which have the capacity to develop into any kind of tissue. These stem cells were then nurtured to become brain cells. The researchers presented their work Friday at the American Association for the Advancement of Science conference in Washington, D.C. When fully grown, the three-dimensional mini-brains measure about 350 micrometers, just visible to the human eye, and look like tiny balls. It takes about eight weeks to grow the brain cells into one of these balls. While the versions aren’t exact replicas of brains, they are made of the same neurons and cells found in human brains, feature the same structures and act in the same way. (TheBaltimoreSun.com)