Say What?! NFL Receiver, Antonio Brown, Threatens to Retiree (give up $30 million) Rather Than Wear a New/Modern TBI Protective Helmet. 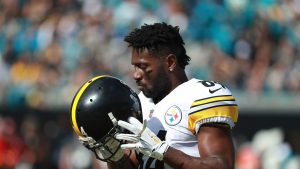 The Pittsburgh Steelers reached that point with Antonio Brown this past offseason, accommodating the trade wish of the productive but increasingly disgruntled star by sending him to the Oakland Raiders.

Brown has yet to play a game for the Raiders. He hasn’t even been practicing. So for the Raiders, there is no on-field production to offset the chagrin that team officials are probably experiencing as they deal with Brown’s act, which is in full force. There have been several reports that Brown cut off communication with the Raiders at least temporarily.

As if all of that wasn’t enough, Brown is at odds with the league over wanting to wear his favorite helmet even though the model has been discontinued by the manufacturer, and is more than 10 years old and therefore not certified by the national governing body. The NFL says that Brown must switch to an approved helmet to be on the field.

According to ESPN, Brown has told the Raiders that he will not play football again unless he’s allowed to wear his old helmet.
Brown’s union is on board with the league’s approach to improving helmet performance in the name of player safety. The NFL Players Association conducts joint laboratory testing with the league of various helmet models, evaluating them on their performance in impact tests.(washingtonpost.com)