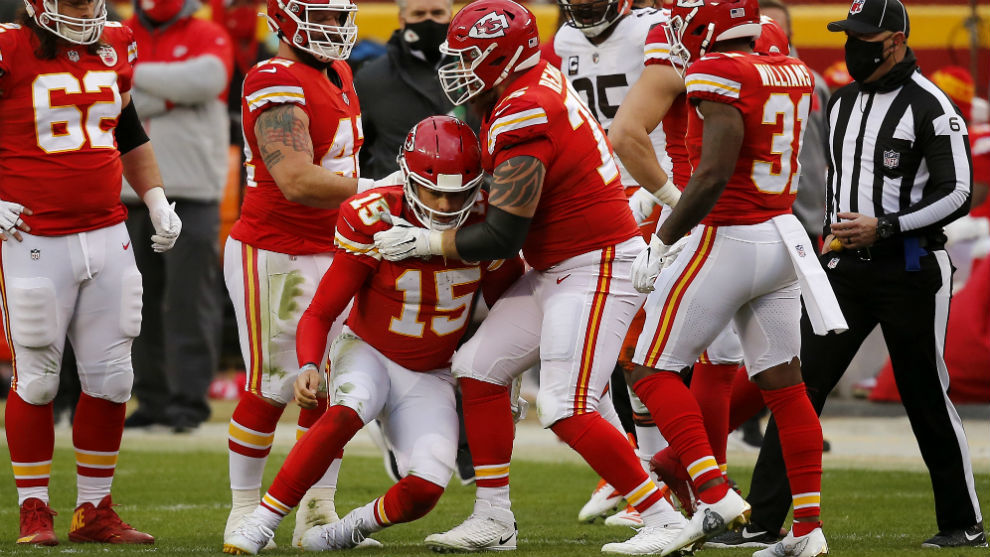 The Kansas City Chiefs are headed to the AFC Championship Game for the third time in three years, but they lost their star quarterback in Sunday afternoon’s clinching victory, with MVP candidate Patrick Mahomes exiting early against the Cleveland Browns due to a concussion.

It’s impossible to put a timetable on Mahomes’ return. The NFL‘s concussion protocol is not based on length of recovery, but rather a specific five-step rehabilitation plan.

For reference, however, The Athletic’s Lindsay Jones cites NFL concussion data in reporting that the median recovery time for the 29 QB’s who suffered a concussion between 2015-2019 was seven days. “Recovery,” in that sense, is defined by the QB clearing protocol and returning to the field.

A few of the recovery steps are:
* The player rests until signs and symptoms return to baseline status, and undergoes neurological, cognitive, and balance tests.
* The player increases exercises and/or sport-specific activities and begins supervised strength training.
* The player is cleared by the team physician for full contact and passes an independent neurological exam, then returns to practice.(cbssportsradio1053.com)

Funny how life has a way of coming back at us.

Like this week when the focus of the AFC Championship Game between Buffalo and Kansas City has been on the concussion Patrick Mahomes suffered to knock him out of this past Sunday’s divisional round playoff victory over Cleveland.

All makes me think back 27 years ago, almost to the day, Jan. 23, 1994, when Cowboys quarterback Troy Aikman suffered a concussion in the third quarter of the NFC Championship Game against San Francisco, one the Cowboys would win, 38-21, to advance to Super Bowl XXVIII in Atlanta scheduled for the following Sunday, Jan. 30.

“That was the worst one I had, in that game, the third quarter. I don’t have any recollection of having played in that game,” Aikman confessed.
“I spent the night in the hospital,” Aikman says, having been taken directly to Baylor Medical Center Dallas for a CT scan and overnight observations. “I actually got discharged from the hospital at 7 in the morning, and I had just enough time to get home, get packed and get to the airport to get on the charter to head to Atlanta.”

When asked if he thought he’d have been allowed to play in that Super Bowl under today’s NFL’s safety protocols, Aikman said, “I can’t imagine I would have been able to play.”

As far as Aikman? Why, he didn’t go into the locker until there was 5:40 left in the third quarter. You know, banking on some smelling salts, those ammonia capsules, clearing his head. But as teammate Bill Bates was quoted after the game, “He tried to talk, but he was incoherent.”

Then came the last straw, a tad more difficult question than what doctors used to ask the “dinged” players: How many fingers am I holding up, yet the players knowing the perfunctory answer always was two. Aikman was asked where this year’s Super Bowl was going to be played, another presumed gimme for sure.

Uh, a still dazed Aikman responded, “Henryetta,” as in his Oklahoma hometown. Oooh, OK Troy, we’ll just put your helmet away for today.(dallascowboys.com/news/spagnola)