Can Our Brave Men and Women in the Combat Field Survive a Head Injury (Gunshot Wound) and Expect TBI Recovery?

Dear Friends, Hollywood fantasy often shows good guys vs bad guys shooting and shooting and if someone gets shot in the head…what? What about…the reality of our brave men and women in the military who try and protect us? 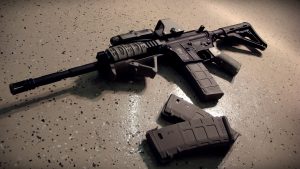 Most people learn about gunshot wounds from watching television or going to the movies. From “Gunsmoke” to “The Sopranos,” and action packed films, guns and violence are often integral parts of the story line. Being shot on the screen can result in instant death, drawn out death scenes, or heroes who brush off the injury and save the day. In real life, the same alternatives exist, depending upon what type of firearm and bullets were used, and where the bullet(s) entered and/or exited the body. It’s all a matter of physics and how much damage the energy the bullet causes.

When a bullet hits the body, all the energy it has is transferred to the body tissue causing damage. The heavier the bullet and the faster it moves the more damage it can potentially cause. The laws of physics state that energy is directly related to the weight of the bullet, meaning that if the weight doubles, the energy doubles. But energy increases by the square of the velocity. Doubling the speed increases the energy fourfold. The purpose of a gun is to make a bullet go faster.

Some people survive gunshot wounds that on the surface appear to be fatal, yet others die from gunshot wounds that appear relatively minor. Just like real estate, it’s all about location, location, location. When a bullet enters the body, its trajectory (where it goes) helps determine the severity of injury. Some bullets can pass through the body with relative little damage, while others enter the body and then ping pong around inside damaging whatever tissue or organs are in its way. If the bullet damages a major artery or the heart, death may occur almost instantaneously; however, some people are lucky and survive a gunshot wound if nothing critical is damaged.(medicinenet.com)

Popular culture and the media loves to highlight and romanticize anyone that receives a gunshot to the head and still manages to survive. They might misplace a few memories, but they are, astonishingly, somehow alive. We have almost certainly scoffed at this idea in the past. Surely, no one can survive taking a bullet to the head, right? Well, almost. Statistically, you would be correct 95% of the time. However, there is still that lucky 5% who endure, despite staring death in the face (literally).

Since the brain stem is nestled safely at the back of the head, most of the time, it is not brain death that is the outright concern for the victim, but rather blood loss. Also, the amount of the blood that is potentially lost is directly influenced by the size and speed of the bullet fired. If a bullet hits any other part of the body, the impact is released to the adjoining body parts, stabilizing the damage and saving the individual. However, the skull is unique due to its enclosed structure.(scienceabc.com)