“Baseball Rule” Exposes MLB Fans To TBI Or Even Death, With No Legal/Financial Recourse. 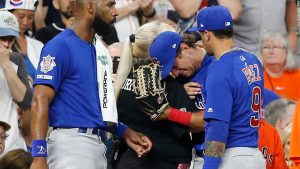 In the hours since a foul ball struck a little girl during the Chicago Cubs’ game with the Astros on Wednesday night, Andy Zlotnick said he heard from the daughter of a 79-year-old Los Angeles Dodgers fan who died last year.

“They’re not even a year into their grieving and this really triggers it,” he said of the family of Linda Goldbloom, who died August 29 of “acute intracranial hemorrhage due to history of blunt force trauma” after being hit in the head by a ball four days earlier.

Zlotnick also heard from the father of a 1-year-old girl who suffered multiple facial fractures at Yankee Stadium two years ago. A 106-mph line drive into the seats seared an imprint of the ball’s seams on her forehead. The incident and others spurred Major League Baseball to order all 30 teams to extend netting to the far end of the dugout.

“I used to say what’s it going to take — a fan to die before major league owners and the commissioner finally do something?” Zlotnick said.

“What will compel them to … extend the netting down the line? Well, of course, last year a fan died and they said nothing and, up until now, they’ve done nothing and now this poor little girl got hurt.”

Zlotnick himself suffered an orbital blowout fracture, a broken cheekbone, lacerations and a detached eye tendon from a foul ball at Yankee Stadium nearly eight years ago. He would not have been protected by extending the netting to the end of the dugout. He was seated with his son in the right field seats.

The girl who was struck on Wednesday night was sitting beyond the far end of the third-base dugout, apparently beyond the netting. Cubs outfielder Albert Almora Jr., who hit the ball, appeared distraught moments later. He threw his hands behind his head and knelt in shock.

For more than 100 years, a legal doctrine known as the “Baseball Rule” has generally immunized big-league teams from liability when fans are hit by balls or bats, Grow said. He has joined others in calling for its abolition on grounds the game was dramatically different when the rule was adopted in 1913.

“The current rule is that teams don’t have to pay for any of these injuries and fans assume the risks by agreeing to sit in the stadium,” he told CNN.

Teams have little incentive to take added measures to protect fans because of the absence of liability, Grow said. Courts have consistently held that pro baseball teams are not liable as long as they take minimal precautions to protect fans. (Wfft.com)