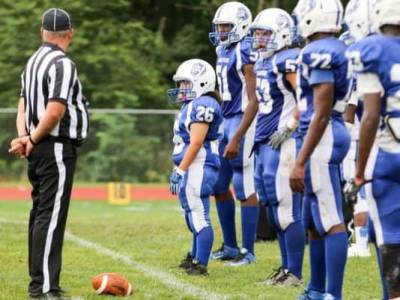 Every family involved in sports know the joys and danger of playing football. (TBI is ever present.) However, Felicia Perez has a different attitude. Felicia Perez didn’t suffer any injuries while playing football for Brandywine High School last season. Unless you consider broken fingers to be injuries, which she does not. That fearless attitude and a ceaseless work ethic have made this 4-foot-8 battering ram willing to smash her nose into any situation a hit with the Bulldogs. “Felicia is tough as nails,” Brandywine head coach Isaiah Mays said last week. “The best way to describe it is she would much rather be the hammer than the nail. She definitely works hard every day, and she has no quit in her.” Delaware has seen several girls play high school football over the last few years, but most have been kickers or safeties. Perez is a middle linebacker and fullback, which puts her in the pileup every time she’s on the field. She wouldn’t want to be anywhere else. “I like to be the dominant person,” Perez said. “Other females follow other females. I’m not a follower. I’m a leader. So I decided I was going to play a predominantly male sport.” (USAtoday.com)