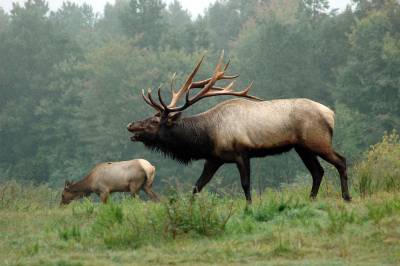 Animals That Live In National Parks Are Not Pets. Elk Kicks Woman In The Head! Possible TBI

A woman visiting Yellowstone National Park was taken to the hospital Tuesday after the second elk attack on a human in three days. Penny Allyson Behr, 53, from Cypress, Texas, was walking between two cabins behind the Mammoth Hot Springs Hotel in Wyoming when she was surprised to discover a female elk with a nearby calf, according to the National Park Service. Behr tried to back away but the elk kicked her in the head and body. “It’s very common for cow elk to aggressively defend newborn calves and hide them near buildings and cars,” the Park Service said in a statement. “Be extra cautious anywhere elk and calves are present: approach blind corners slowly and maintain a safe distance.” On Sunday, Charlene Triplett was also attacked by a female elk near the Mammoth Hot Springs Hotel where she works. In this instance, the elk was protecting a calf hidden by cars, the Park Service said. The elk reared up and kicked Triplett several times in the head, back and torso. She was badly injured and flown to the trauma center at Eastern Idaho Regional Medical Center about 150 miles away. The Park Service said it is unknown if the same elk was responsible for both attacks. (USAtoday.com)